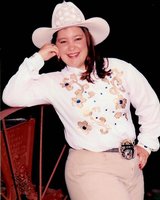 Funeral services for Twylia McKinney Joiner, a resident of Bastrop, LA, are scheduled for 10 AM Saturday, July 25, 2020, at Bonita Road Baptist Church with Bro. Jeff May and Bro. Casey Johnson officiating. Interment will follow in the Bonita Road Baptist Church Cemetery. Visitation will be from 5-7 PM Friday, July 24, 2020, at Golden Funeral Home. Twylia was born on July 15, 1978 and passed away on July 21, 2020 at the age of forty-two. Twylia was a member of Bonita Road Baptist Church. She was a teacher of special needs children for many years. She loved “her babies,” as she called them. Twylia was a beloved wife, mother, sister, aunt, daughter, and daughter-in-law. She loved and cherished her family. Twylia grew up riding horses, which led to making lifelong friends. She loved playing softball and later coaching Marleigh’s softball team. She was Wyatt’s biggest fan watching him acting at the Rose, and was Charleigh’s listener when she was giving a review of a video game she liked. She loved her children so very much. Twylia loved and was so proud of her nephew, Parker Jordan. They could have some interesting conversations to say the least. Twylia is survived by her husband of twenty years, Barry Joiner; son, Houston Wyatt Joiner; twin daughters, Charleigh Hunter Joiner and Marleigh Kate Joiner; parents, Keith and Pam McKinney; sister, Jamie Jordan and husband Dustin; nephew, Parker Jordan; father and mother-in-law, George and Carolyn Joiner; aunts, Beverly Eubanks and husband Edward, Nonie Taylor; and numerous cousins. Twylia is preceded in death by her grandparents, James (Bill) and Jeannie McKinney and Houston (Hobo) and Betty Reynolds. Serving as pallbearers will be Hobie Martin, Hunter Martin, Ashley McLeod, Kaleb May, Kelley May, Todd Buffington, BJ Adams, and Chad Womack. Honorary pallbearer will be Parker Jordan.