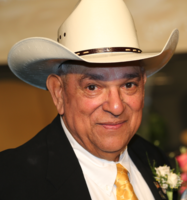 Visitation for Robert Paul DeBlieux will be held Saturday, April 3, 2021 from 12:00pm – 1:30pm at Golden Funeral Home in Bastrop, Louisiana. It will be followed by a Graveside Service at 2:00pm at St. Joseph Catholic Cemetery in Bastrop, LA under the direction of Golden Funeral Home. Father Timothy Herd will be officiating. Guest speakers will be Reverend Allan Eppinette and Reverend Justin Akers with special music performed by family. Robert DeBlieux passed away peacefully in his home Friday, March 26, 2021. He was 82 years old. Robert DeBlieux is a native of Morehouse Parish. He was born March 13, 1939 in Bastrop. He was raised just outside of Bastrop on the Old Bonita Road. He worked the family farm and at the Log Cabin Grocery store, owned by his parents, Honore Louis and Ozet Perot DeBlieux. Robert was the youngest of 16 children. He graduated Bastrop High School, class of 1958. He married Peggy West DeBlieux (deceased June 3, 1999) September 30, 1960 and had one daughter, Angela (Angie) Faye October 15, 1961. During this time he worked at the International Paper Mill in Bastrop and also farmed. In 1971, Robert moved his family to Black Bayou in Monroe and farmed the Oliver Plantation until 1974. He also purchased and operated Black Bayou Boat Dock in 1974-1982. Robert and Peggy then started the Perryville Trailer Park off Hwy. 165. Robert studied and received his Life & Casualty and Auto & Liability insurance license and worked as an agent for Farm Bureau in Bastrop. After 6 months, he was offered the opportunity to own the Shelter Insurance Office in Bastrop. He retired after 17 years with Shelter Insurance where he won numerous, top seller awards and accommodations. He was also a Notary Public and retired as Justice of the Peace of Morehouse Parish, Ward 1 (1997-2019). You always saw him in his cowboy hat and boots. Robert DeBlieux was a true Cowboy who loved his God, loved his family, loved his country and loved his horses. Robert was a lifelong member of St. Joseph Catholic Church. He served as Eucharistic Minister and Usher. Robert is survived by his only daughter, Angela (Angie) Faye DeBlieux-Bryan and her husband, Captain Daniel (Dan) Stephen Bryan, of Leeville, Louisiana, sister, Tina Stephenson of Charleston, South Carolina and brother, Johnny DeBlieux and wife Wilma of Bastrop. Robert is preceded in death by his wife, Peggy Ray West DeBlieux of Bastrop, his parents, Honore Louis and Ozet Perot DeBlieux of Bastrop, and 13 brothers and sisters. Honorary pallbearers are Gene Mardis, Johnny DeBlieux, Gerald Wallace, DeVohn Hayes, Wayne Warner and Dan Bryan. Honorary Horses are Snort and Gypsy. The family extends special acknowledgment to his best friends, Gene Mardis and Gerald Wallace, his caregiver, Vickie Morman and the staff of Premiere Hospice. In lieu of flowers, donations in Robert’s memory can be made as a gift to Angie & Dan Bryan or to St. Joseph Catholic Church.