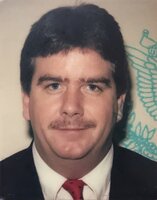 Michael Owens Martin, 66, passed from this earth on September 28, 2021 in Monroe, Louisiana, of cancer. Mike was born in Bastrop, Louisiana on February 1, 1955, the son of Patrick H. Martin III and "Billie" (Malvin Williams Owens) Martin. Mike loved history, travel, music, and theater; a conversation with him was sure to give an education on all manner of subjects, particularly World War II and the Civil War. Mike had a wonderful, if mischievous, sense of humor. We will miss the twinkle in his eye right before he delivered the punchline and his sly smile right after. After graduating from Bastrop High School and Northeast Louisiana University, Mike began a proud, 25-year career as a customer service agent for Delta Airlines, where he received numerous accolades and awards, including nomination for the Chairman’s Club, Delta’s highest honor. His career with Delta allowed him to experience the world, living in London, Atlanta, Dallas, Cincinnati, Knoxville, Fort Lauderdale, New Orleans, and Monroe, and traveling across the globe. After taking early retirement in 2007, Mike moved to Hot Springs Village, Arkansas and continued to travel the world, often with his dear friend Gail Hines. Mike was preceded in death by his parents, his beloved sister Ellen Martin Highsmith, and his niece, Katie Martin, as well as his grandparents, Judge Patrick H. Martin Jr. and Helen Schramm Martin of Fond du Lac, Wisconsin and Dr. Malvin Williams Owens and Letha Marshall Owens of Bonita, Louisiana. Mike is survived by his brother Patrick H. Martin and his wife Ann of Clinton, Louisiana, by numerous nieces and nephews, and by many cherished, life-long friends. There will be a graveside service at Christ Church Cemetery in Bastrop, La. 10:30 AM Saturday, November 6, 2021, followed by an informal gathering of friends and family at a location to be determined. Messages for the family can be sent to: mike@phmartin.com.