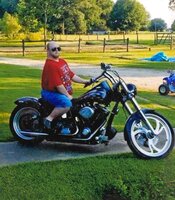 Funeral services for Michael John Bulloch are scheduled for 2 PM Thursday, January 6, 2022, in the chapel of Golden Funeral Home with Pastor Wendell Prince and Pastor Claude Maddox officiating. Interment will follow in Bartholomew Methodist Church Cemetery. The family will receive friends Wednesday, January 5, 2022, from 5 PM - 7 PM at Goldens. Michael John Bulloch, age 40, of Rayville, went to be with, as he said it, his Father in Heaven, on January 1, 2022, with his parents at his bed side. Michael was born June 21, 1981, on Father’s Day in Bastrop, LA, to John Michael and Connie Bulloch. “Bud”, which he liked being called, loved everyone, especially police officers and firefighters. Besides family, he was met by his police officer/pastor/baptizer/2nd dad, Robin Hood. He received many awards from the Special Olympics over his earlier years of life, which he made all about him with the college cheerleaders and Miss Louisiana. He even made it to the Special Olympics in New Orleans at Tulane University, which included staying on campus. He was an avid WWE fan and loved spending time with family. Michael John attended Dunn Church of God and loved the Lord with all his heart. “Bud” was preceded in death by paternal grandparents, John Homer and Dorothy Bulloch; maternal grandparents, Harold Lowther and Jack and Jeanie Rainbolt; great-grandparents, Bessie Rea, Genie and Lucille Dopson; uncles, Donnie and Randall Bulloch; and aunt, Barbara Westbrook. Along with his parents, he is survived by his sister, Jessica Hilliard and husband, James; brother, Brandon Bulloch and wife, Mary K.; nephews, JaMichael Hilliard, Jeremiah Hilliard, Cole Bulloch, and Joby Clark; aunts, Brenda Bulloch, Lorri Stephenson and husband, Steve, Janet Hammons; uncle, Arnie Lowther and wife, Kathy; great-aunts, Connie Diaz, Shelba Mcgee; his “Ouiser,” Teresa Youngblood, along with special cousin, Deanna Mizell and numerous other cousins. Serving as pallbearers will be William Lowther, Scott Bulloch, Scott Smith, Cliff Schmitz, Mike Morgan, and Chris Wilson. Honorary pallbearers will be Dr. McDonald, Todd Shipman, Terry Huff, Brent Purvis, and all that wore a uniform - police officers, fireman, and all branches of the military. Special thank you to Dr. Lambert, Dr. Becker, and nurses, Erin, Gabriella, Amy, Tyler, Jr., and all the staff of Willis Knighton Hosptial.