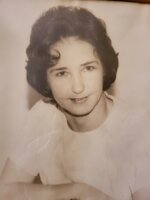 Stella Louise Martin March 6, 1925 – October 19, 2022 Stella Louise Martin, 97, formerly of Bastrop, LA, passed away peacefully on October 19 while surrounded by family. Louise spent a lifetime cultivating five generations of children, grandchildren, great grandchildren and great, great grandchildren. As the matriarch of the family, she’ll be remembered for her gentle, but common-sense-based demeaner that helped nourish the next generation to be better than the one before. The last surviving sibling of nine brothers and sisters, we’ll remember Louise for the laughs and special times spent with family, and her southern hospitality to make sure all that entered were made to feel at home. A talented, self-taught scratch cook, Louise knew how to fill a table and tummies with her special home-cooked meals – later sharing her skills with the Bastrop community as the owner of three restaurants. From her humble beginnings in Mize, Mississippi, to her resourcefulness in those lean, early newlywed years, Louise was a rising star before her time. From her ability to cultivate flowers and farm-to-table vegetables, create a meal worthy of its own TV show, or nurture a cough or ailment with homeopathic medicine, her loved ones were the beneficiaries. We know that those that love us don’t go away, they walk beside us every day. Unseen, unheard, but always near, so loved, so missed, so very dear. Louise will be laid to rest beside her husband of 52 years, W.L. Martin. In addition to her husband, she was preceded in death by her son, U.S. Air Force Captain Wayne Martin (2002), and granddaughter, Holly Dumas Dunn (1997). She is survived by her daughter Gloria Martin Dumas of Tallahassee, FL., five grandchildren, 10 great grandchildren, and three great, great grandchildren. A graveside service will be held on Sunday, October 30 at 2:00 p.m. at Bonita Road Baptist Church Cemetery, in Bastrop, Louisiana.