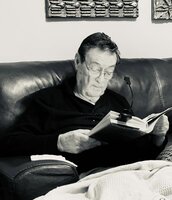 Billy Joe Moore, age 88, of Bastrop, LA passed away peacefully in his sleep in his home in Mount Juliet, TN on Friday, November 18, 2022 surrounded by his family. He was born on August 15, 1934 to his parents, William Ernest and Edna Earl Moore. Billy grew up in Bastrop, LA and worked in his family business. He also served in the army. He married his long time sweetheart Carolyn Lynell Albritton on October 22, 1960. Billy and Carolyn had 3 wonderful children, James Moore, Stephen Moore and Lisa Moore Long. Billy enjoyed fishing with his brother, story telling about his youth, and most of all spending time with his kids and grandkids. One thing he enjoyed in his later years was driving around the countryside and looking at the deer. Billy was preceded in death by his parents and lovely wife. He is survived by his brother, Jerry Moore; children, James, Stephen and Lisa; grandchildren, Stephanie and Eric and great grandchildren, Luke, Zachary, Brantley and Audrey. He will be greatly missed by his friends and family! There will be a celebration of life to honor Billy on Tuesday, November 22, 2022 from 12 noon until 1:30 p.m. at Golden Funeral Home followed by a graveside service at 2 p.m. in Christ Church Cemetery.