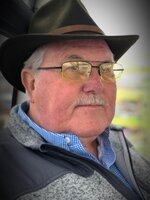 Funeral services for James Douglas "Jimmy" Christmas are scheduled for 2 PM Wednesday, January 11, 2023, in the chapel of Golden Funeral Home, with Bro. Britt Dupree and Bro. Tim Post officiating. Interment will follow in Memorial Park Cemetery. The family will receive friends Tuesday, January 10, 2023, from 5 PM - 7 PM at Goldens. Jimmy passed away peacefully at home on January 7, 2023, after a brief illness. He was born on June 4, 1945, in Lake Village, Arkansas. After Jimmy graduated from Lake Village High School in 1963, he went on to study Business Administration at University of Arkansas in Monticello where he was the student body president and president of Phi Lambda fraternity. The year 1967 was a good year for Jimmy as he moved to Bastrop; married the love of his life, Peggy; and graduated from college. He went on to be a co-owner with his brother, C.V. Christmas, in Bastrop Roofing & Construction, Christmas Realty and Bastrop Mini-Warehouses. Known throughout the entire parish, Jimmy is definitely known as a “mover and shaker” as he has supported, encouraged, and worked for Morehouse parish for over 50 years. A member of the Chamber, Jimmy served on the board of directors and served as president of the chamber twice! He was extremely instrumental in lobbying with the state in obtaining a hotel/motel tax within the parish, of which the funding is used for the Chamber and for the Morehouse Tourism Commission. Jimmy was awarded the J. D. Kelley Award in 2009. In 2020, the J. D. Kelley award was renamed to include recognition of the late C.V. Christmas and Jimmy Christmas to be the Kelley-Christmas award, which was awarded to the Christmas Family. Jimmy served as a member of the Bastrop Jaycees and served as their president. He received the Nathan Bolton Community Service Award in 1994. He is currently a member of the Bastrop Optimist Club, where he has served as president. Jimmy served as a member of the Morehouse Economic Development Board and as Chairman for 10 years of the Morehouse Parish Crime Stoppers. He also served on the Morehouse General Hospital Board of Directors and served as president. He is a member and was the president of the Louisiana Chapter of Missouri Fox Trotters. He also is a member of the Masonic Mt. Gerizim #54 Lodge. The Morehouse Activity Center (the MAC) was a huge project for Jimmy, as he helped obtain the funding and oversaw the complete construction of the facility. Jimmy was one of the original members of the Pea Cooking Crew, in which this crew is famous for their Pea Gumbo. Jimmy and his wife, Peggy, are members of Reily Memorial Methodist Church. Jimmy has supported Prairie View Academy for the past 50 years while his children, grandchildren, nieces, and nephews have attended. Uncle Jimmy and Aunt Peggy are well known and loved by the children that have attended and still attend PVA. He also served on the PVA Booster Club. Jimmy and his wife enjoyed traveling with friends and family along with their horses and going to Mountain View, Arkansas to listen to the music. Jimmy was loved and respected by his family, friends, and community for his giving and supportive nature. He spent his life giving to those around him. He never waivered in devoting his time to the needs of everyone around him. His happiness came from spending time with his family and working tirelessly supporting community and civic organizations and activities. He had a great love for Bastrop and it’s citizens. He gave so much time, energy, and pride working to keep the city going. Jimmy was the backbone of his family, and he was the family member everyone turned to when they needed someone to advise them. He never criticized and put so much thought into every kind word of advice and support he gave. He exemplified what a great man represents, loyalty to God, country, family, friends, and community. Jimmy is preceded in death by his parents Hazel and Carroll Christmas, siblings Carolyn McCollum (Alton) and C. V. Christmas (Syble), and niece Debbie Christmas Pettis. Jimmy is survived by his wife of 55 years, Peggy, and their two children, Christy Wright (Richard) and Chris Christmas (Stacey). Their precious grandchildren are Madison (CJ), Macie, Cayli, and Caleb, along with his mother-in-law, Myrtle Brown. In addition, there are numerous nieces, nephews, and extended family and friends left behind. Pallbearers are Kevin Conley, Nelson Goss, Marty Mangrum, Kevin Morgan, Todd Solomon, and Jeff Zaunbrecher. Honorary pallbearers are Felix Brown, Travis Holley, Perry Kelly, John Sibley, Ray Thomas, Sheriff Mike Tubbs, and Andy Wilson. In lieu of flowers, the family requests that memorial contributions be made to the PVA Booster Club or charity of your choice.